Bartonella henselae, the agent of cat-scratch disease in immunocompetent individuals, is a fastidious facultative intracellular, gram-negative pathogen. It is also the causal agent of bacillary angiomatosis and bacillary peliosis, which are histologically characterized as lobulated proliferation of endothelial cells in immunocompromised patients (e.g. AIDS). 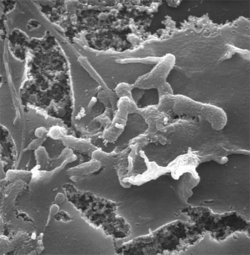 Endothelial cells are one presumed habit at of Bartonella spp.The ability to induce vasculoproliferative disorders in humans is a unique feature of Bartonella spp., however the underlying molecular mechanisms need to be further elucidated. Parts of our current projects are described below; our research is funded by the Deutsche Forschungsgemeinschaft (SFB 766 and priotity research programs 1130, 1131, 1316).

The research group 'Bartonella' is investigating host cell-interactions mainly of Bartonella henselae. A novel 'two-step' model of pathogenicity has been described suggesting that host cell-derived vasculoproliferative factors play a crucial role in the pathogenesis of bacillary angiomatosis ("paracrine-loop model"). The resulting proliferation of endothelial cells could be interpreted as bacterial pathogens triggering the promotion of their own habitat: the host cell. Similar disease mechanisms are well known in the plant pathogen Agrobacterium tumefaciens which causes crown gall disease.
This fascinating angiogenic potential is of particular interest in terms of analysing bacteria-triggered tumour formation. Solid-tumour growth in animals and plants depends on the formation of a sophisticated vascular network consisting of blood vessels or water-conducting elements, respectively. The elucidation of tumourous diseases caused by bacteria might provide new insights into microbial pathogenicity, tumour growth and pathological angiogenesis. Moreover, the idea of the induction of a complete neoangiogenic process by a bacterium or its recombinant products is a fascinating concept in terms of the development of novel treatment strategies of ischemic disorders such as artherosclerosis.

We identified a nonfimbrial adhesin of B. henselae designated as Bartonella adhesin A (BadA). BadA is a 340-kD outer membrane protein, has a trimeric structure and contains domains homologous to the Yersinia enterocolitica adhesin A (YadA) and to the Xanthomonas adhesin-like protein A (XadA) of the plant pathogen Xanthomonas oryzae pv. oryzae.

Together these TAAs belong to the recently described family of trimeric autotransporter adhesins (TAA), which are important virulence factors of Gram-negative bacteria. BadA mediates the binding of B. henselae to extracellular matrix proteins and to endothelial cells